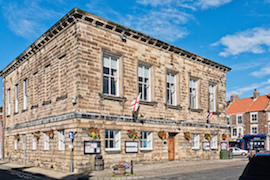 Stokesley Town Hall, an imposing building in the centre, was built in 1853 in the Italian style of architecture, at the expense of Col. Robert Hildyard replacing an older town house and toll booth. Originally this had an open arcade (butter market) at the rear.

The town centre is now protected by a Conservation Area with many Grade I and Grade 11 listed buildings. These can be explored following the ‘Stokesley Trail’, available from the Parish Council office in the Town Hall. The trail concludes with a peaceful riverside walk, as a contrast to the bustle of the High Street.

South Levenside was well planted with trees in 1934-35 in remembrance of Miss Jane Pace afterwards Mrs S Henty born at Stokesley on the 8th February 1817. She was the first white woman to settle permanently in Victoria, Australia in 1836.

Stokesley had many industries such as printing and publishing, weaving and textile mills. Manufacturing of linen was carried on here, and that trade was extended, by two mills, one built by Thomas Mease, to be worked by steam, located on the banks of the Leven in the centre of the town. This building is still in use today as an Agricultural warehouse.

The Domesday book of 1086 records a water mill in Stokesley with both water and horse drawn wheels within the same building, an unusual feature. The mill was demolished in 1983, but the Stokesley Society rescued this wheel, dating from about 1850, to be preserved as a relic of Stokesley’s long association with milling. is still to be seen on the banks of the river Leven.

The former Preston Grammar School was the first Grammar School built in the town in College Square in 1832 with money bequested by John Preston, an attorney of Stokesley. This building is now in use as a Pizza Takeaway.

The First Methodist Chapel dated from 1765-1812 at which John Wesley preached on 11th July 1776 on one of his twelve visits to the town but, according to his journal, ‘it would by no means contain the congregation’.

Traditionally John Wesley stayed here on one of his preaching visits to the town. The home of Lady Mary Hullock under whose will the Lady Hullock’s Charity was created in 1854 to provide fuel and clothing to the poor of the town. Stokesley had a parish workhouse accommodating fifty inmates in operation from as early as 1755 on High Green. A number of other parishes in the area paid for paupers to be taken in by Stokesley.

The dilapidated building receiving, sick, and vagrants’ wards was unable to provide segregated accommodation for the different classes of inmate. Eventually, in 1847, the Stokesley Guardians were persuaded to build a new workhouse accommodating 104 inmates at a site to the north-east of Stokesley. It was completed in 1848 and at the end became a Care Home, it was closed in 2005 and redeveloped into retirement properties. 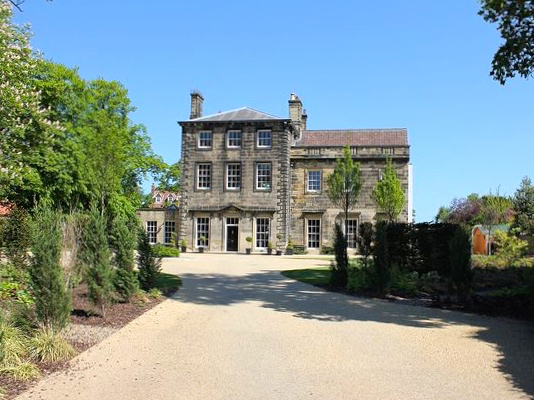 Stokesley Manor House is an imposing building at the eastern end of the Market Square, the gate piers came form Angrove Hall which was demolished in 1832.

Stokesley Manor House has served as a hospital, court house and public library. It is now returned to being a private home again.

Stokesley Agricultural Show is held every year on the third Thursday in September. It was founded in 1859 with a meeting held in ‘The Golden Lion’ on the High Street (now Chapters Hotel & Restaurant). The West Green area has trees with old buildings surrounding the green. The whole of the town provides features of planted floral tubs in the summer months to welcome visitors to the area.

Source: Visit Stokesley. The content has been updated to fit Stokesley today.